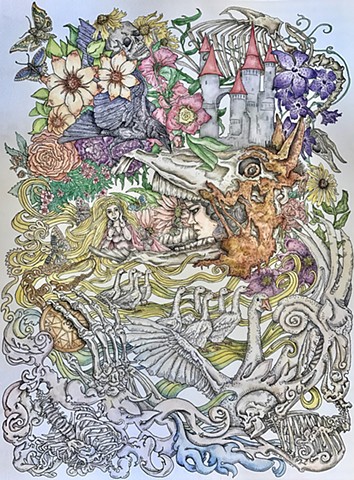 Inspired by "Goose Girl" a German fairy tale from the collection of the Brothers Grimm written in 1815. The story begins with a widowed queen sends her daughter to her bridegroom in a faraway land. She sends her with a waiting maid. The princess's horse is named Falada, and he is magical for he can speak. The princess is given a special charm by her mother that will protect her as long as she wears it. The princess and her servant travel for a time, then the princess grows thirsty. She asks the maid to go and fetch her some water, but the maid simply says: "If you want water, get it for yourself. I do not want to be your servant any longer." So the princess has to fetch herself water from the nearby stream. The servant leaves the poor princess to drink from the river by her dainty little hands. When she bows to the water her charm falls out of her bosom and floats away. The maid takes advantage of that. She orders the princess to change clothes with her and the horses as well. She threatens to kill the princess if she doesn't swear never to say a word about this reversal of roles to any living being. Sadly, the princess takes the oath. The maid servant then rides off on Falada, while the princess has to mount the maid's nag. At the palace, the maid poses as princess and the "princess servant" is ordered to guard the geese with a little boy called Conrad. The false bride orders Falada to be killed, as she fears he might talk. The real princess hears of this and begs the slaughterer to nail Falada's head above the doorway where she passes with her geese every morning. The next morning the goose girl addresses Falada's head over the doorway: "Falada, Falada, thou art dead, and all the joy in my life has fled", and Falada answers " Alas, Alas, if your mother knew, her loving heart would break in two." On the goose meadow, Conrad watches the princess comb her beautiful hair and he becomes greedy to pluck one or two of her golden locks. But the goose girl sees this and says a charm: "Blow wind, blow, I say, take Conrad's hat away. Do not let him come back today until my hair is combed today." And so the wind takes his hat away, and he cannot return before the goose girl has finished brushing and plaiting her hair. Conrad angrily goes to the king and declares he will not herd geese with this girl any longer because of the strange things that happen. The king tells him to do it one more time, and the next morning hides and watches. He finds everything as Conrad has told. That evening, he asks the princess to tell him her story. But she refuses to say anything because of her oath. The king suggests that she might tell everything to the iron stove. She agrees, climbs into the stove and tells her story while the king listens from outside. As the king is convinced she has told the truth he then has her clad in royal clothes, he tricks the false princess into "choosing her own punishment". She tells the king that a false servant should be dragged through town naked in a barrel with internal spikes. As a result, she is punished that way until she dies. After that, the prince and the true princess are married and then reign over their kingdom for many years.