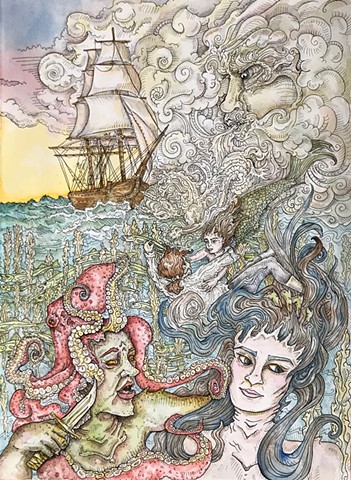 "The Little Mermaid" is a fairy tale written by the Danish author Hans Christian Andersen in 1837. When the Little Mermaid's turn comes to visit the surface, she rises up to the surface to find a handsome prince on a great ship. A violent storm hits, sinking the boat, and the Little Mermaid saves the prince from drowning. She delivers him unconscious to the shore but to her dismay, the prince never sees the Little Mermaid or even realizes that it was she who had originally saved his life. The Little Mermaid, longing for the prince and an eternal soul, visits the Sea Witch in a dangerous part of the ocean. The witch willingly helps her by selling her a potion that gives her legs in exchange for her tongue and beautiful voice, and she warns her that once she becomes a human, she will never be able to return to the sea. Consuming the potion will make her feel as if a sword is being passed through her body, yet when she recovers, she will have two human legs and will be able to dance like no human has ever danced before. However, she will constantly feel as if she is walking on sharp knives. In addition, she will obtain a soul only if she wins the love of the prince and marries him, for then a part of his soul will flow into her. Otherwise, at dawn on the first day after he marries someone else, the Little Mermaid will die with a broken heart and dissolve into sea foam upon the waves. The prince enjoys the company of the little mermaid but ultimately marries a princess from a neighboring kingdom. The prince and princess celebrate their new marriage on a wedding ship, and the Little Mermaid's heart breaks. She thinks of all that she has sacrificed and of all the pain she has endured for the prince. She despairs, thinking of the death that awaits her, but before dawn, her sisters rise out of the water and bring her a knife that the Sea Witch has given them in exchange for their long, beautiful hair. If the Little Mermaid kills the prince and lets his blood drip on her feet, she will become a mermaid once more, all of her suffering will end, and she will live out her full life in the ocean with her family. However, the Little Mermaid cannot bring herself to kill the sleeping prince lying with his new bride, and she throws the knife and herself off the ship into the water just as dawn breaks. Her body dissolves into foam, but instead of ceasing to exist, she feels the warm sun and discovers that she has turned into a luminous and ethereal earthbound spirit, a daughter of the air.