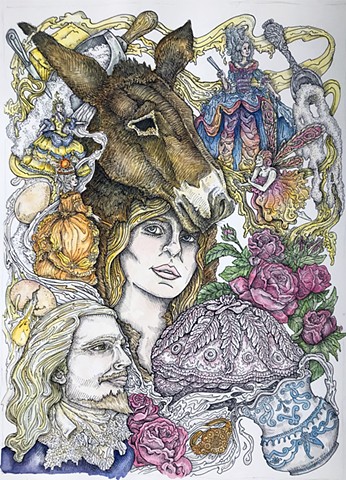 A French fairy tale written by Charles Perrault in 1695.

A king had a beautiful wife and a rich castle, including a marvelous donkey whose droppings were gold. One day his wife died, after making him promise not to marry except to a woman whose beauty and attributes equaled hers. The king grieved, but was, in time, persuaded to seek another wife. It became clear that the only woman who would fit the promise was his daughter. She went to her fairy godmother who advised her to make impossible demands as a condition of her consent: a dress as bright as the sun, a dress the color of the moon, a dress all the colors of the sky, and finally, the hide of his marvelous donkey (which produced gold, and thus was the source of his kingdom's wealth). Such was the king's desire to marry her that he granted all of them. The fairy godmother gave her a marvelous chest to contain all she owned and told her that the donkey skin would make an excellent disguise. The princess fled and eventually found a royal farm where they let her work in the kitchen, despite her ugliness in the donkey skin. On feast days, she would dress herself in the fine gowns her father had given her, and one such day, the prince came by her room and peeped through the keyhole. He fell in love at once, fell ill with his longing, and declared that nothing would cure him but a cake baked by Donkeyskin, and nothing they could say of what a dirty creature she was dissuaded him. When Donkeyskin baked the cake, a ring of hers fell in it. The prince found it and declared that he would marry only the woman whose finger it fit. Every other woman having failed, he insisted that Donkeyskin try, and it fit. When she had dressed herself in her fine gowns, his parents were reconciled with the match. Donkeyskin later found that her father had remarried to a beautiful widow and everyone lived happily ever after.